As always at Marimurtra, we work to ensure sustainability of the environment. Recently, an innovative system created by IoTrees, has been implemented to detect Red Palm Weevils (Rhynchophorus ferrugineus) which attack our palm trees. The new system consists of seismic sensors that are placed in the palm and detect the sounds weevils make as they chew their way towards the growing point or ‘heart’ of the palm. (Unlike other plants, palms have only one growing point, and if that is destroyed the palm cannot re-grow, and it dies). 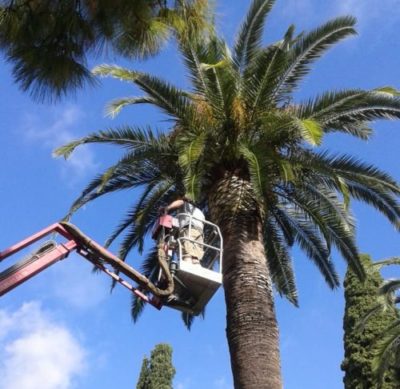 This small insect is the culprit behind the deaths of thousands of palm trees every year in our country, and milions worldwide. The weevil has become a real plague that affects a large number of Communities in Spain, especially those located in coastal areas, and its pace of expansion has been unstoppable, and seemingly as well, the damage caused to the palm trees. The larva is the life stage that really causes the greatest damage to the palm trees. After hatching, they feed on the soft inner tissues and new growth of the tree, and it is at this moment that death begins for the palm.
In the Marimurtra Botanical Garden, a total of 4 palm trees have died due to this insect and, in order to avoid future attacks, an innovative and environmentally friendly system has been sought to help identify sufficiently in advance the specimens that suffer from this plague.

The sensors have incorporated a system that detects seismic movements. When they detect a match for a sound wave pattern coinciding with the sound of a weevil biting the palm stipule, it sends a signal to a mobile device, warning that that palm is being attacked. It is able to detect a larva of only 1 cm in length, which allows a very early detection of the attack to guarantee the survival of the specimen. 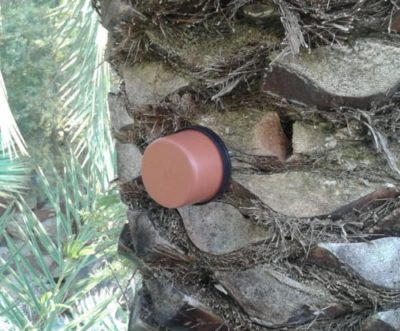 In this way, the death of any specimen can be prevented by early detection. Once detected, we provide a treatment with plant extracts to eradicate the pest before it is too late. In Marimurtra, no chemicals are used and the treatment is done with Neem (Azadirachta indica) vegetable oil.