The Marimurtra Botanical Garden, aware of the presence of this invasive species in its environment, has been taking measures to reduce its abundance for some time (mapping of potential breeding points and microbial treatments of critical points). Collaborations have recently begun with researchers who are experts in this field (CEAB-CSIC, UPF) to contribute to the collection of scientific data on this species from participation in a scientific project. (Mosquito Alert).

The Marimurtra Botanical Garden is currently working to contribute to the study of the tiger mosquito and reduce its abundance.

The tiger mosquito is considered a public health problem not only because of the irritation it causes from its bites but also because of its ability to transmit numerous diseases.

How can I identify it? 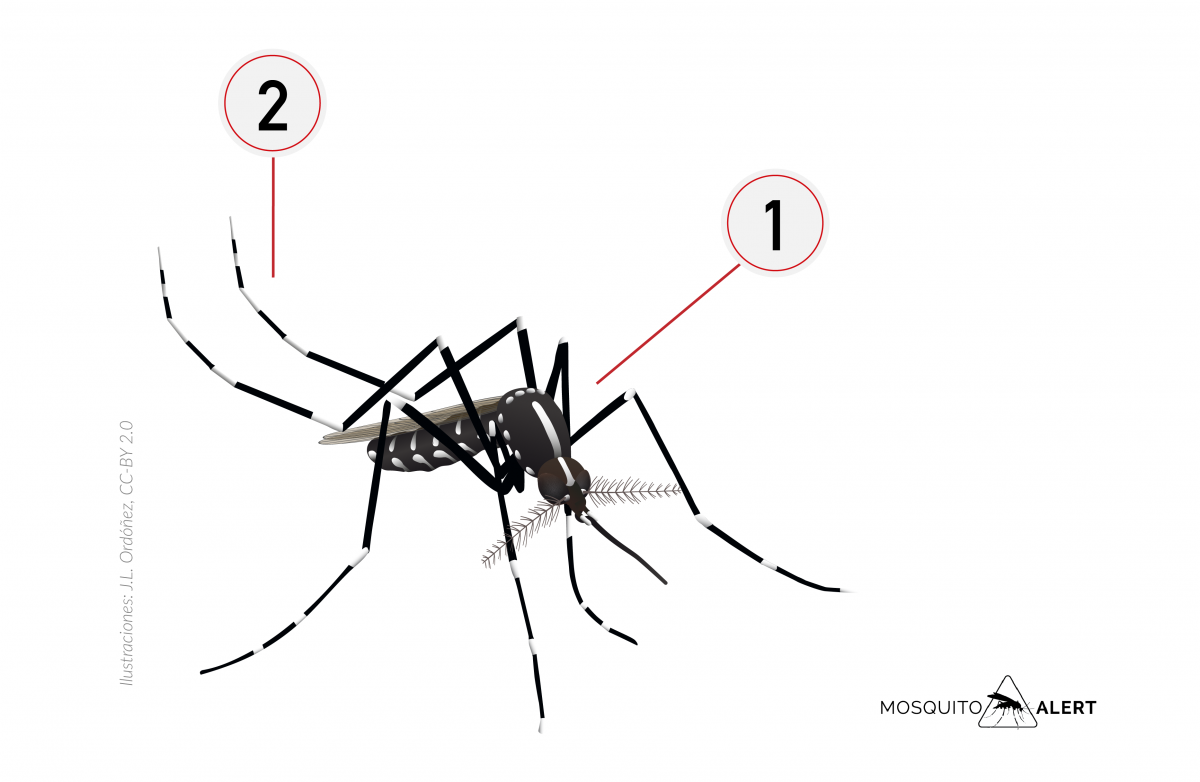 It is a small black mosquito, 6-9 mm long. It can be recognized by having a single white line on the back of the head and chest (1). Its legs are black with white spots that give it a zebra appearance (2).

Unlike other mosquitoes, the tiger mosquito is diurnal, with high activity in the early morning and especially in the afternoon until sunset. It is in these periods when it usually bites.

Although it also enters the houses, it is closely linked to the outdoor spaces, where it finds vegetation among which to hide to rest. Its ideal habitat is the humid and shady corners. In them, in addition to finding a refuge, they usually find artificial places to breed.

Where does it come from?

The tiger mosquito is native to Southeast Asia. In recent decades it has invaded many countries, being present today in Asia, Africa, America, Australia and Europe. Globalization has allowed its passive expansion by sea and land, the transport of used tires and plants has contributed to its invasion.

It arrived in Europe in 1979, entering through Albania, in 2004 it was detected for the first time in Spain in the province of Barcelona. The species is currently distributed throughout the Mediterranean coast and inland. Its great plasticity to adapt to new conditions suggests that the species will expand its range in the coming years.

French researchers have studied the genetic composition of the tiger mosquito in Europe, which has allowed them to detect different routes of entry from Asia and how it has spread across the continent. The results confirm the importance of moving mosquitoes inside cars, a phenomenon previously described by Mosquito Alert researchers. The movement of mosquitoes between regions determines the genetic composition of their populations, and can have important practical implications such as the existence of differences between mosquitoes in their effectiveness in transmitting viruses such as Zika, dengue or chikungunya.

Mosquitoes are insects with a complex life cycle, in which adults and larvae occupy different habitats and have different life forms. The larvae are aquatic. Adults (1) are terrestrials that lay their eggs (2) on or near water, or wet places. The larvae (3) are aquatic and feed on microorganisms and suspended organic matter, rising to the surface of the water to breathe atmospheric oxygen. Within a few days, depending on the temperature, the larvae transform into rounded pupae (4). They do not feed at this stage, but the metamorphosis of the aquatic larva into an adult is taking place. 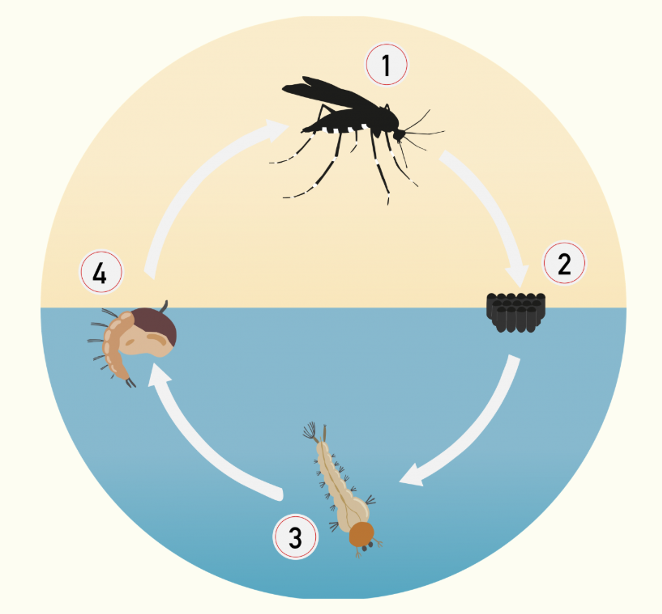 Why is it here and how to fight it

In their natural habitat, the larvae develop in small accumulations of water on the vegetation, in tree trunks as a result of atmospheric precipitation. Today, it has adapted to the artificial containers found in homes and cities. Females use all kinds of natural or artificial containers that retain some water. Plates of pots, vases, buckets, rain gutters, sinks, disused fountains, or any object that may contain water are likely to be used by the tiger mosquito where females lay their eggs above water level. These eggs are drought tolerant, and will hatch when covered in water.

The best way to fight the tiger mosquito is to eliminate the water points where it can reproduce. The administration takes control measures and actions in public areas to prevent this, but citizen participation is needed for control to be effective, eliminating breeding points inside our homes.

They are not large fliers, so they are not far from where they were born, especially if they are surrounded by everything they need: shelter, shade, blood and water to breed. They move a radius of 200 to 500 meters from their breeding site.

In adulthood, males and females have a different diet. Males feed only on the nectar of flowers. Females also feed on nectar, but for the development of eggs they need proteins obtained from the blood. That is why only females sting.

Aside from the discomfort caused by its bites, the tiger mosquito is considered a public health problem because of its ability to transmit numerous diseases through the bites.

The main diseases that it can transmit in our environment are dengue, Zika, chikungunya and yellow fever. Although in laboratory conditions it has been proven that it can be infected with up to 22 different viruses.

The species, in addition to feeding on the blood of humans, bites a variety of animals, mainly mammals. This versatility increases their health risk by being able to transmit pathogens from animals to humans and vice versa.

What do we do in Marimurtra Botanical Garden to fight the Tiger Mosquito?

Since 2019, at the Marimurtra Botanical Garden we have launched a plan for the detection and action of the tiger mosquito. Together with the Xatrac Environmental Association, the points where the tiger mosquito may have the easiest to lay its eggs (potential breeding points) have been studied with the aim of carrying out control actions from the application of biological products.

These actions allow us to know the current state of the garden, evaluate the effectiveness of the products used, establish new doses in the necessary cases, application of mechanical measures at some points, review of critical points periodically. 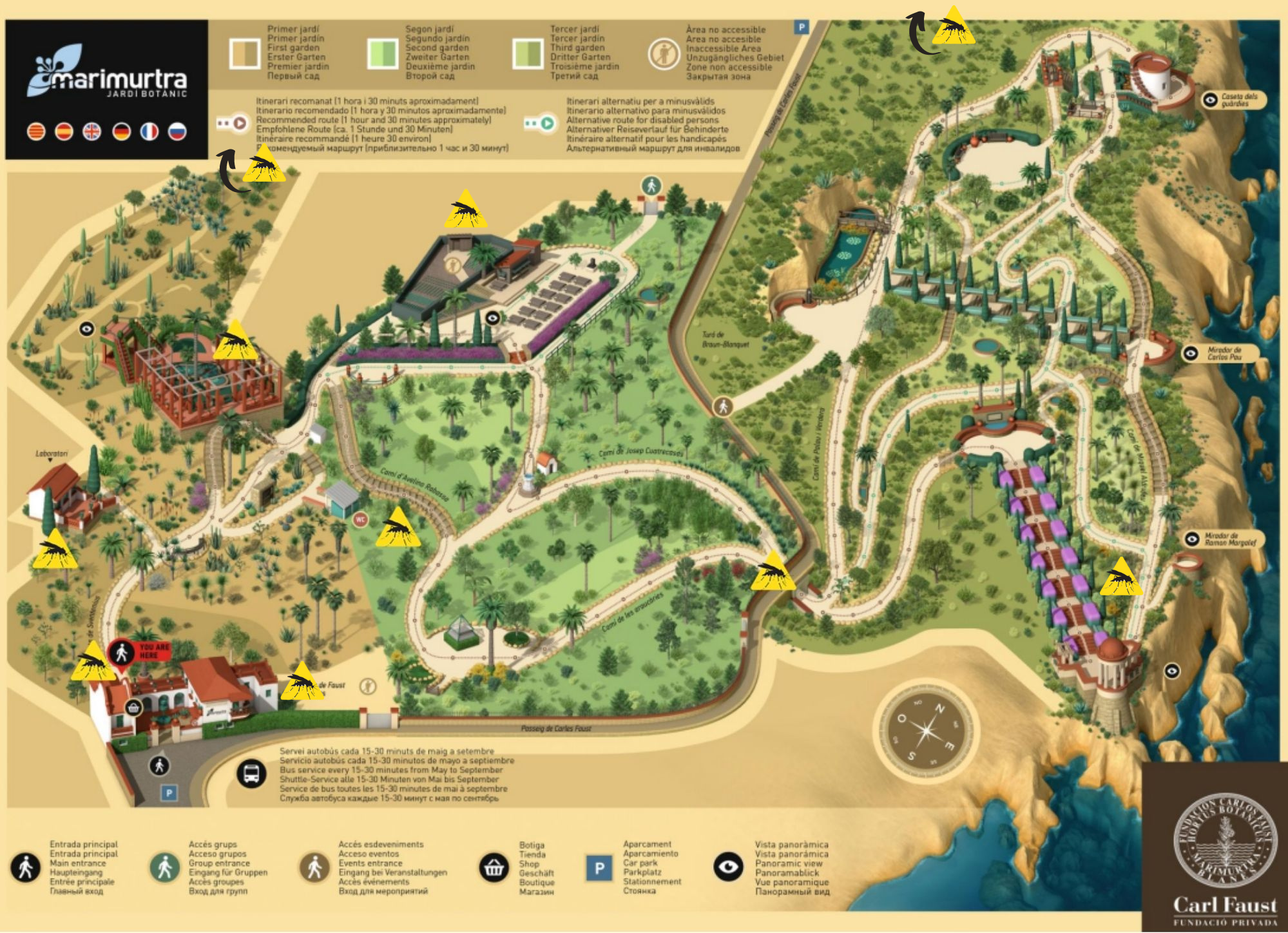 Map of the location of the traps for the tiger mosquito in Marimurtra.

In 2020, a collaboration began with experts from the CEAB-CSIC and UPF participating in the Mosquit Alert scientific project to contribute to the scientific knowledge of this invasive species. Over time, the collaboration has been consolidated and new actions have been defined.
Current actions:

Marimurtra also participates in promoting the use of the Mosquit Alert Citizen Science App by informing its visitors.

These actions make it possible to obtain data to better understand the distribution and seasonality of mosquitoes, especially the tiger mosquito, as well as to know the age structure of the species. The data obtained will be very useful in determining the potential of mosquitoes in the transmission of diseases.

You can find more information about the tiger mosquito at the following websites.

During 2021, work related to the population study of mosquitoes, particularly the tiger mosquito, was carried out at the Marimurtra Botanical Garden, a privileged place to study the ecology of these insects.

The following experiments were performed with the results mentioned.

1. Survival experiment with the aim of studying the population structure of the tiger mosquito and its survival.

This number of traps covers the different climatic and ecological conditions of the garden.

In the areas furthest from the nerve center of the Garden (temple, third house), which are more unprotected from the wind and in drier environments, they have less abundance of mosquitoes. In contrast, areas such as the tunnel or around the toilets, which are more humid and protected, are more abundant.

The traps caught a large number of mosquitoes during 2020, however, this number was greatly reduced during 2021.

This difference suggests that the biological treatment applied has had a great effect, along with the removal of bromeliads from one of the most critical areas of the garden, reducing the reproductive potential of this species in that area. 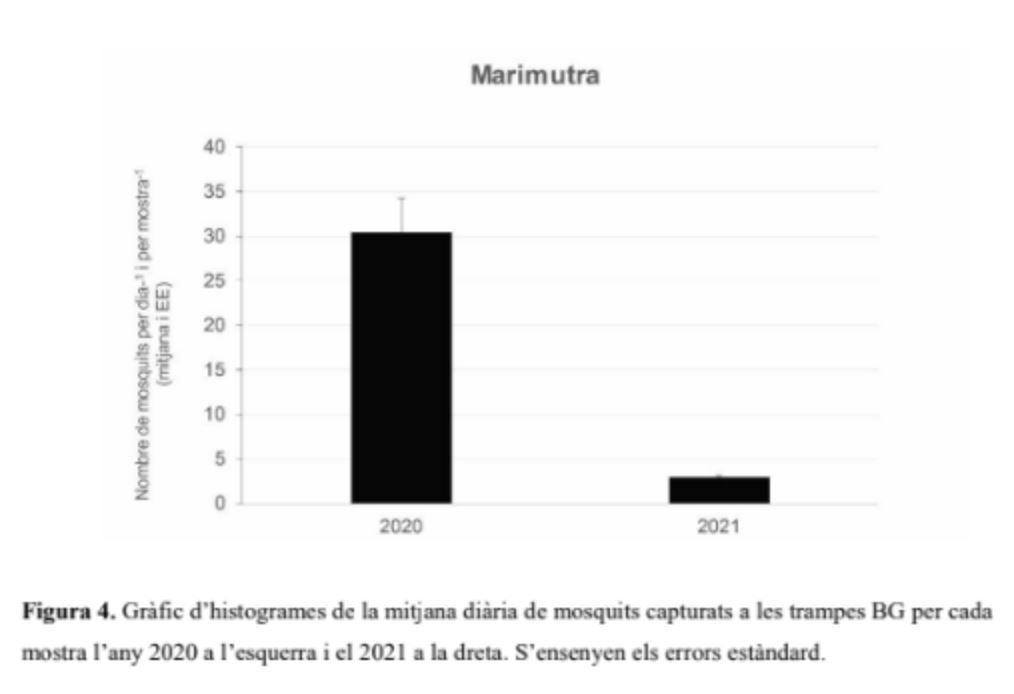 Traps have caught mosquitoes from April 5 to November 22.

The decline in tiger mosquito abundance appears to be highly related to the drop in ambient temperature, which is observed in late August (more than six degrees in less than 3 days) and coincides with the decline in the number of mosquitoes caught. . The relationship between meteorological data from the Botanical Garden itself and fluctuations in tiger mosquito populations is still being studied.

3. Annual monitoring of larval populations with or without larvicidal treatment

a) Experiment with gibrells in 3 locations:
Girbells were placed with water and organic matter, one was treated and the other was not. This experiment made it possible to contrast the effectiveness of the treatment, since the girbell with treatment practically did not grow any larvae and in the one that had no treatment, a large number were counted. Therefore, it is confirmed that the treatment is highly effective.

4. Study of the human-mosquito interaction network through DNA analysis of mosquitoes and humans within the Marimurtra.

In 2021, DNA samples were taken from mosquitoes captured in Marimurtra and from people working there or visiting them.

The day held in Marimurtra on 12/06/21, where a large part of the Mosquito Alert team from CEAB-CSIC and UPF took part, aimed to make the project known to visitors and allowed them to gather · Read many samples.

The large number of samples collected, the team has been able to develop the necessary techniques to find out how many people can be bitten by the same female tiger mosquito. This information is very interesting to better understand the extent of transmission of pathogenic viruses of which the tiger mosquito (among other mosquitoes) is a vector.