This herbarium, dated around 1909, has been recently discovered and will allow the presence of certain species of plants in Catalonia to be dated for the first time 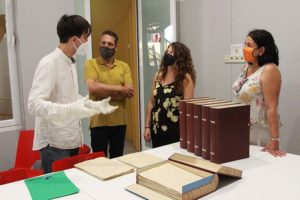 The Marimurtra Botanical Garden has received on loan a herbarium from the Vedruna School of Malgrat de Mar elaborated between 1909 and 1913 which will allow botanists and experts of the Marimurtra Botanical Garden to study and document the collection of plants collected at the beginning of the 20th century in different towns of the Baix Empordà that it contains. In other words, we can take a trip back in time to rediscover the plants that were in that place a hundred years ago and compare them with the current ones, which will allow us to date the presence of ornamental crop plants in the area and document species found for the first time time in Catalonia. In addition, this natural history collection places in the territory one more sample of the naturalist and botanical work that existed in Catalonia at the beginning of the century.
The herbarium received from the Malgrat de Mar Vedruna School consists of about 400 specimens of the ruderal, riverside, horticultural and ornamental flora of three towns in the Baix Empordà region (Sant Tomàs de Fluvià, Torroella de Fluvià and Vilacolum). It is preserved in very good condition and was prepared by Luis de Pont Adroher, a Girona pharmacist of whom the University of Girona herbarium also preserves some of his specimens.

The Francesc Eiximenis 2021 Fund, awarded by the Ramon Muntaner Institute, has selected the study “Two Herbaria from Girona: Botany from Girona at the beginning of the 20th century (1909 to 1939)” presented by botanist Carlos Burguera, botanist curator of the herbarium of Marimurtra Botanical Garden. Precisely, the herbarium received is the first of these two representative herbaria of the Girona flora, which will allow to witness the plant species found in different regions of the province collected during the first half of the 20th century.
While waiting to receive the second herbarium, the Carl Faust Foundation begins the restoration and conservation work of the herbarium to begin its computerization and study.